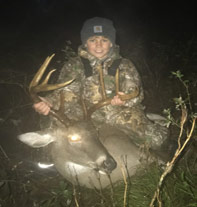 Mylan Beasley said the deer hunt that resulted in his 9-year-old son’s taking of a 10-point buck in Luverne was “a moment I hope every father gets to experience with their kids.” Young Porter Beasley’s buck was the biggest he’d ever taken – and it was the winning entry in our eighth annual Alabama Black Belt Adventures Association Big Buck Photo Contest.

Porter’s entry received almost one-third of the 9,140 votes cast! He won a CVA .50 caliber Optima Muzzleloader with a KonusPro Scope and gun case, valued at $535.

“We are always happy to highlight the memories made while hunting in the Black Belt,” said Pam Swanner, director of the ALBBAA. “We love seeing families share these experiences here in the Black Belt.

“Our contest this year had entries from 20 of the 23 Black Belt counties with a wide range of hunters sharing their photos – young people and adults, men, women and children. We enjoy bringing these contests to our followers to promote ethical hunting and fishing in the Black Belt and celebrate all our region has to offer.”

Porter, a fourth grader at Luverne School, took the 10-pointer on the Friday afternoon of the special youth hunt in November. The buck had a rough gross score of 141, according to his dad and hunting partner. Mylan described the hunt this way:

“As the evening progressed, we had several does and really young bucks out feeding. Sometime around 4:30, a pretty nice buck came out and tempted Porter, but he decided to pass since it was his first hunt of the year and there was plenty light left in the day. As the shadows disappeared and the deer really started coming in, I looked over Porter’s right side and noticed a rack moving through the woods. I carefully got his attention and he positioned his rifle into the shooting window.

“When the buck exited the timber and stood in the plot maybe 30 yards away, he was already in Porter’s sights. Before I could tell him to take a deep breath and make a good shot, Porter’s rifle cracked and the buck kicked with both back legs and dug his way back into the timber. Porter had to call his Uncle Burch, Mom and GG and let them know pictures of a huge buck were coming. We got out of the stand and took right to his trail. The buck was found within minutes. … A few pictures were taken before we field dressed him and I posted them on my Facebook page. By the time we made it out of the woods, word had traveled quick and the picture had a lot of attention.”

This year the Alabama Black Belt Adventures Association has launched a new photo contest specifically for the Best Dogs in the Black Belt. It’s for all sporting dogs in the field – not for your favorite puppy sitting in front of the fireplace. So far, we have more than 160 entries in the contest at Best Black Belt Dogs.  You can enter at that link and vote – once per day, per entry, per email address. Our deadline is March 31.

“This is a way to pay tribute to their versatile skills afield, their natural instincts and that which is so endearing, their eagerness to please,” said ALBBAA Director Pam Swanner. “They deserve recognition, and this contest will shine a spotlight on your canine hunting buddy.

“We hope everyone will take the time to upload their favorite photo of their dog in action and have a chance to win the Filson Game Vest and Sure Shot game calls.”

The top vote-getter will receive a Filson Game Mesh Vest (valued at $145) perfect for the Black Belt’s mild winter seasons and designed for upland bird and small game hunting, donated by Quail Forever, one of the nation’s leading conservation organizations, plus three varieties of Sure Shot game calls – the Yentzen Classic (the original double reed duck call), the Rascal 7-in-1 call for duck, quail and turkey hunting and the Speckle Belly Goose Call along with the Lanyard
(valued at $125). Total prize package is worth $270.

Turkey hunters can start matching wits with those wily gobblers on March 21 and will have until May 3 to fill their limit of five (combined fall and spring seasons). The daily limit is one per day, of course.

The spring turkey season will be delayed for a week on the following Wildlife Management Areas: Barbour, J.D. Martin-Skyline, Hollins, Oakmulgee, Lowndes, Choccolocco and Perdido River. The Special Youth Hunt is scheduled for the Saturday and Sunday of the week before opening day and the Special Disabled Hunt is one day before all opening days. It’s a great idea to re-familiarize yourself with the regulations from the Alabama Department of Conservation and Natural Resources.

With the opening on the season, ALBBAA will launch its eighth annual Big Gobbler Photo Contest. Be watching for more details on Facebook.

A new entertaining campaign featuring a bounty of drinks and eats created by the locals across Alabama’s Black Belt will be launched soon.  This fun, back roads adventure, titled Feed Your Adventure – Flavors of the Black Belt, will highlight themed trails designed around the hand-crafted foodstuffs, brews and spirits found across our 23 county region and where to shop for them. We also map out the unique places to visit along the way, dining spots favored by the locals and cozy places for the bedtime stop.

Be watching our Facebook page for the official launch of these exciting road trips and the photo contest! 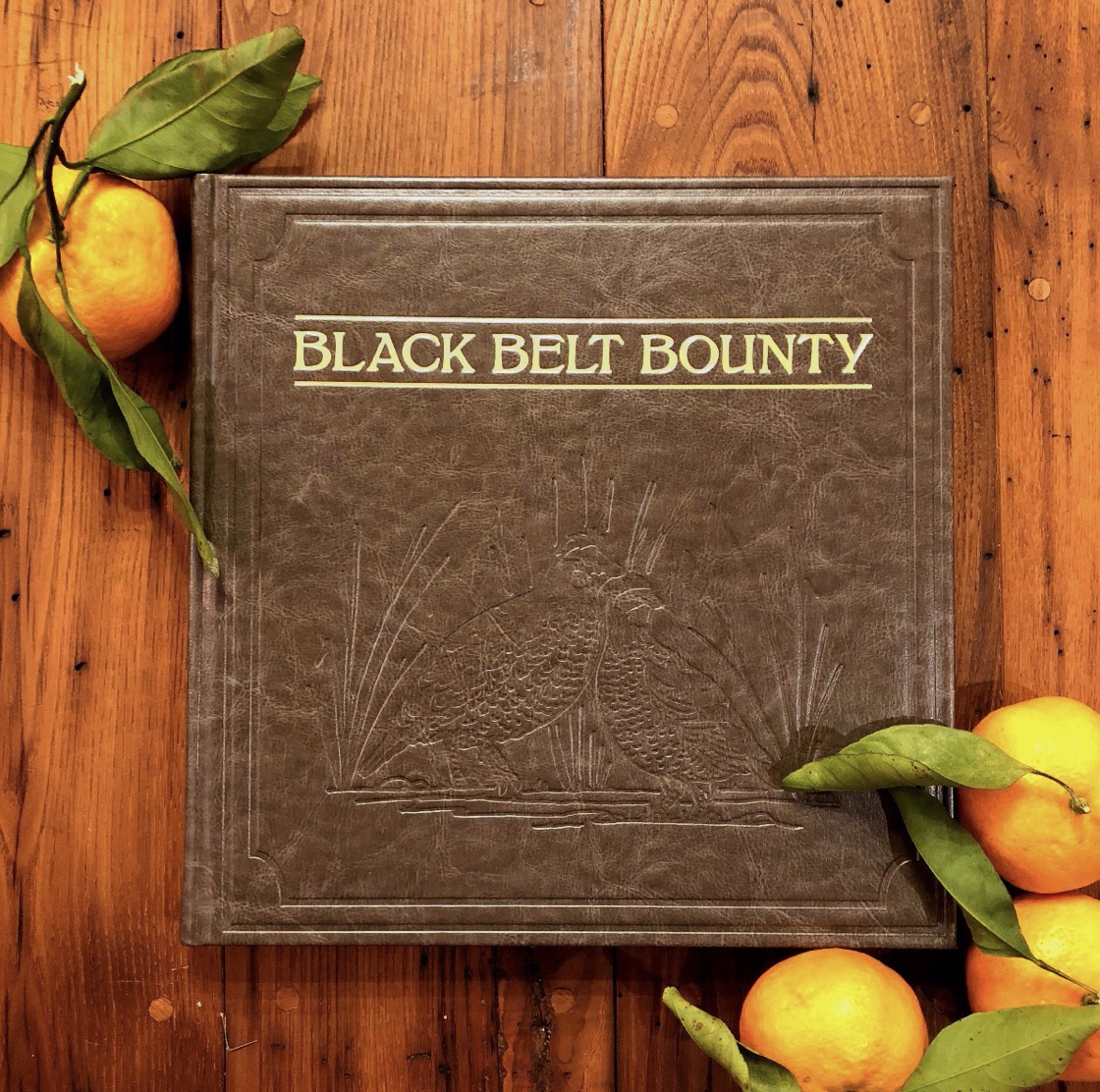 Demand for the Alabama Black Belt Adventures Association’s amazing coffee table book, Black Belt Bounty, has been incredible – so much so that a second printing is now in the works.

The book has been an overwhelming success since it went on sale late last year. Orders have been filled from – among other places – Washington, Illinois, Florida, Georgia, South Carolina, Tennessee, Mississippi and as far away as Canada. Coffee table books are all the rage as wedding gifts, too, so get ready for those upcoming summer nuptials.

This deluxe hard-cover 11 x 11 is a treasure trove of endearing stories of the Black Belt’s hunting and fishing heritage penned by award winning outdoor scribes.  The pages are heavily laiden with images and artwork from nationally recognized wildlife photographers and an artist as well a wildgame recipe section by celebrity chefs.  Most all the contributors are from Alabama and many from the Black Belt region.

Black Belt Bounty promises to become a prized possession for anyone who enjoys the outdoors or simply a good read and it’s a gift that will endure for many generations.  We expect the second printing to be as popular as the first, so pre-order your copy of the second edition on our website at this link.

The week before Eufaula’s Pilgrimage, the Wilcox County Historical Society will sponsor the 2020 Wilcox County Tour of Homes on March 28. A special welcome reception is set for March 27 at Riverbend, sponsored by Chris Bailey and Ryan Dunagan, owners of The Pecan on Broad in Camden and The Brittany House Antiques.

The list of historic sites to see will include: River Bluff Plantation-the Beck-Bryant-Talbot Home, the Strother-Gibbs Home, the Matthews-Tait-Rutherford Home (Yaupon Plantation), the Liddell-Phillippi Home (House on the Hill), the Beck-Darwin-Hicks Home, the Camden Associate Reformed Presbyterian Church and the First Presbyterian Church. Also on the tour will be the Old Shoe Shop Museum in downtown Camden, along with the Beck-Miller Law Office, the Dale Lodge and the Old Wilcox County Jail.

A new feature this year will be a living history presentation on the grounds of Liberty Hall, which will have a portion of the first floor open for visitors.

The historic St. James Hotel should be opening any day now following renovations by Rhaglan Hospitality, a Hilton brand. Rhaglan previously redeveloped the Redmont Hotel in downtown Birmingham, according to a Montgomery Advertiser report. The city of Selma sold the hotel, built in 1837 at 1200 Water Avenue, to Rhaglan and the company has conducted a job fair to hire about 50 employees.

A WSFA-TV report quotes Race Banks, Regional Director and General Manager for Rhaglan Hospitality, saying that some of the major improvements done by the company include 13 more guest rooms and a grand staircase in the middle of the lobby.

The hotel is thought to be the lone surviving antebellum riverfront hotel in the Southeast and, according to Selma lore, in 1881 outlaws Frank and Jesse James stayed at the hotel. The hotel was known as The Brantley throughout the 19th century, according to a report by Yellowhammer News, but it closed in the 1890s. At the corner of Water and Washington overlooking the Edmund Pettus Bridge, it had been used for several commercial and industrial purposes throughout the 20th century before it was reopened for a time as the St. James.
new entertaining campaign featuring a bounty of drinks and eats created by the locals across Alabama’s Black Belt will be launched soon. This fun, back roads adventure, titled Feed Your Adventure – Flavors of the Black Belt, will highlight themed trails designed around the hand-crafted foodstuffs, brews and spirits found across our 23 county region and where to shop for them. We also map out the unique places to visit along the way, dining spots favored by the locals and cozy places for the bedtime stop.

Be watching our Facebook page and website for the official launch of these exciting road trips and the photo contest!

Welcome to the Black Belt